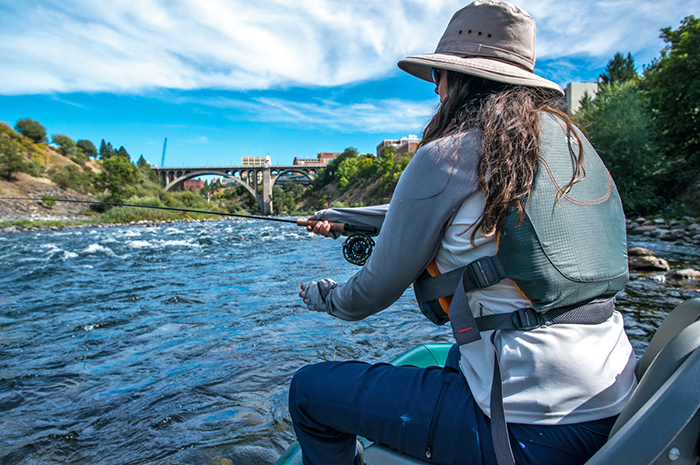 The view from the top of the boat slide at RedBand Park is the same for everyone. It’s a long way from the bottom and can seem a little daunting if you’ve never actually walked a boat down it. The water is clear enough to see the rocks in the river even from way up top. It’s a beautiful view that sets a high bar for the coming float trip down the Spokane River.

The perspective however is different for everyone. Mine is a little like the perfect mix between an M. Night Shyamalan movie and a Bev Doolittle painting. I don’t actually “see dead people”, that’d be weird, but I do sense their presence mingled amongst the current scenery.

It’s not at all difficult for me to imagine the massive flows of water that were set loose when the ice dam that formed glacial lake Missoula gave way and flood waters formed much of what we know of our area today. It helps me stay positive on days when rowing against higher flows feel arduous.

From the river's edge looking upstream I can see the gondolas making their turn at the base of the falls above the Monroe St Bridge, and in my mind's eye the rickety platforms and figures of Spokane and Nez Perce natives spearing the June Hogs are a shadowy backdrop. The overwhelming awareness of this once amazing yearly arrival of over a million king salmon, that averaged ninety pounds, to our river is a simultaneously heartbreaking and awe inspiring image. In June the silver water holds two meanings for me. I can’t help but think of the yearly rendezvous of the tribes in what we now know as Riverfront Park. When they gathered to harvest what must have seemed an endless bounty.

Occasionally, I see in the clear water running under my boat, a hint of blood that must have clouded the water on that fateful day in 1858 when US cavalry soldiers slaughtered over 800 horses along its banks in an effort to quell an uprising. When I spy riders on their own mounts in what is now Riverside State Park I envision the ghosts of riderless ponies almost always mixed among them. It’s certainly no stretch then to imagine that there in the midst of the whitewater rafters and other fishing boats are natives and voyageurs in their canoes traveling up and down the rivers banks. That the mink, otter and beaver we see almost daily were once a currency that led to the building of the Spokane House trading post at the confluence of the Spokane and Little Spokane Rivers far downstream. Every now and then I see old Jacco Finlay paddling past in his dugout canoe laden with prime skins.

On the high bank across from the slide the architecture of offices and condos in Kendall Yards is inescapable. A testament to growth and expansion and stability for our city. But there underneath them in that wonderful Doolittlish shading I see the shantytown of returning WWII veterans struggling to overcome displacement and almost certain PTSD long before we knew of it’s existence. They came together in fellowship along the banks of the river to share commonality and perhaps, in their way, to heal.

Further downstream we float under the Sandifur footbridge and see the freestanding and abandoned abutments of the once towering High Bridge train trestle that stood a hundred or so feet above the river and spanned that entire gorge. I have my own treasured memories of this spot and have never drifted through there without seeing it’s image. I am routinely surprised at how few locals recall its existence.

I travel almost daily under the bank that holds the San Souci mobile home park. It’s a fine residential park in a spectacular location on the river. I however, see in the shade trees and structures the amusement rides of the once grand Natatorium Park. I hear barkers and music and children laughing. I see Babe Ruth hitting fly balls in the baseball diamond, and there is some lucky girl snatching the gold ring on the Looff Carousel. Is there anything quite as happy as carnival music?

Every now and then we capture images of wildlife along the shoreline. The occasional moose or deer. Customers are delighted to see these stately creatures inside the city limits. Each time that I hear that, I wonder what it might have once been like when they were visible at every turn. So imagining them more often than not is hardly a struggle.

Oddly, I do not dream of bigger or more plentiful trout. I am grateful for any and all the fish I net for my guide passengers. I have no illusions of the bounty we enjoy in lieu of what the river has withstood. There are those that live here in Spokane that talk of the river as though it were a nuclear waste site. Oh I hear your stories, they’re nearly the same every time. Three eyed trout with two heads that glow in the dark. Don’t eat the fish. Don’t swim in the water. They see the river as some sliver of slime that is barely contained from swallowing everything that lives along it’s banks.

This is the barely recognizable image I see repeatedly. The Spokane River is akin to a domestic violence survivor. She has withstood decades of abuse at our hands.

She still finds it in her heart to give every day.

I, nay we, should all be so gracious.